Hello everyone! I am back with episode 3.4 of the Mongol Empire Podcast, the Rise of Temujin series. In this episode Temujin takes giant strides towards becoming an important steppe leader but at the expense of his relationship with his anda, Jamugha. Temujin’s elevation to Khan really marks the beginning of a period when life on the steppe becomes quite unsettled. This will manifest itself as an increase in inter-tribal warfare as alliances rise and crumble, culminating in 1206 when Temujin will defeat the final coalition against him. Whilst initially confined to the Mongolian plain, the effects of the upheaval will be felt in the sedentary states that border the steppe, contributing to their eventual downfall.

The copy of the Secret History of Mongols that I am using (Paul Kahn’s 1998 version) defines this era as the ‘the wars in Mongolia’; and whilst the poem focuses on Temujin’s struggles, he was just one of a number of leaders trying to impose their authority.

As I mention in the episode, I have put together a rough map of the ‘Big Five’ tribes (Kereyid, Merkit, Mongol, Naiman and Tatar) with the position of the Jin Empire and Xi Xia given to provide greater reference. It was constructed using Rashid al-Din’s Jami’u’t Tawarikh (1998), René Grousset’s Empire of the Steppes (1970) and H. Desmond Martin’s Chingis Khan and his conquest of North China (1950). The underlying map is from Edward Stanford’s Atlas of the Chinese Empire (1908). 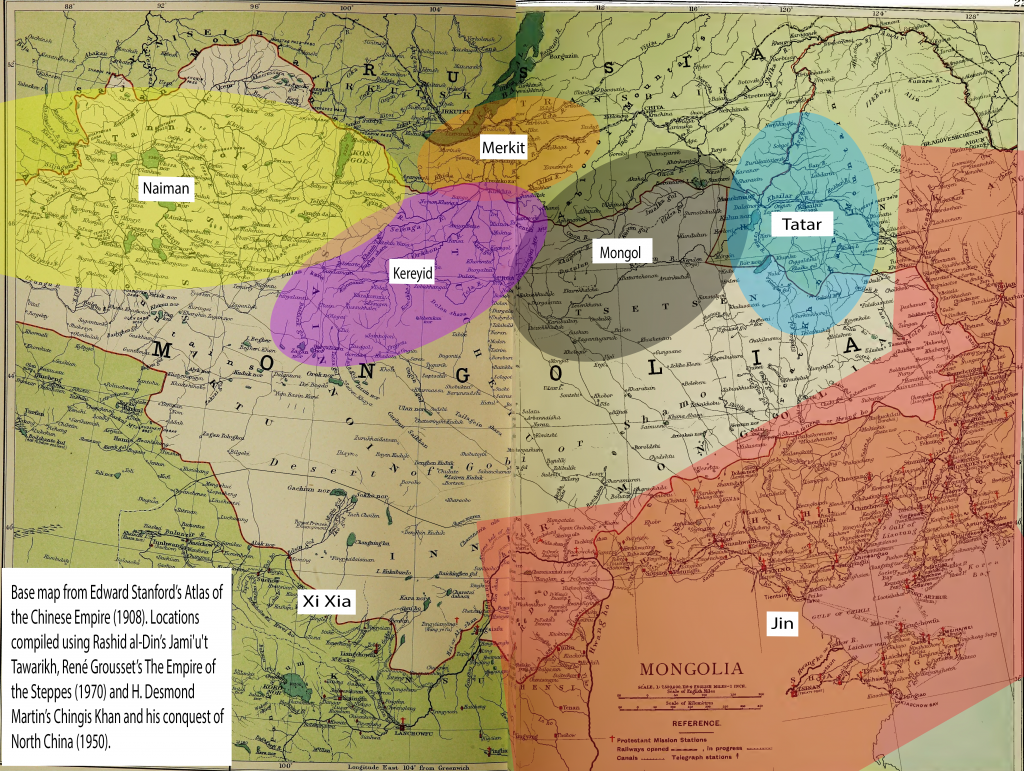 The full-size version can be found here.

Looking forward, obviously episode 3.5 is currently being produced and I am undertaking research for the episode on the Kereyid. I have recently obtained a copy of Chinese Scholars on Inner Asia (2012), edited by Luo Xin and Roger Covey, which has one article devoted entirely to the Kereyid tribe. The author, Chen Dezhi, brings together Eastern and Western sources to create a detailed history of the Kereyid up to the thirteenth century.

I have no planned date for the release of this intermediate episode, but it will likely be in the coming month or two to coincide with the increased co-operation between Temujin and Toghoril in the main narrative.

That is your update for this episode, I shall be back in the coming weeks.